It adopts hydraumatic principle which functions the hand-operated way to apply 3000kg test force. The central part of PHB-3000 is a small hydraulic system in which a release valve is used to control the test force. When the force reaches 3000kg, the release valve will open and the pressure will fall down. As specified in the operation manual, the tester needed to be forced to make the indicator of the dial point at 3000kg test force for 3-5 times. Thus it is equivalent to the test condition of Brinell hardness testing method to hold 3000kg test force for 10-15 seconds with 10mm steel ball, which complies with ASTM E110.

The structure of the instrument is shown as Fig .1. 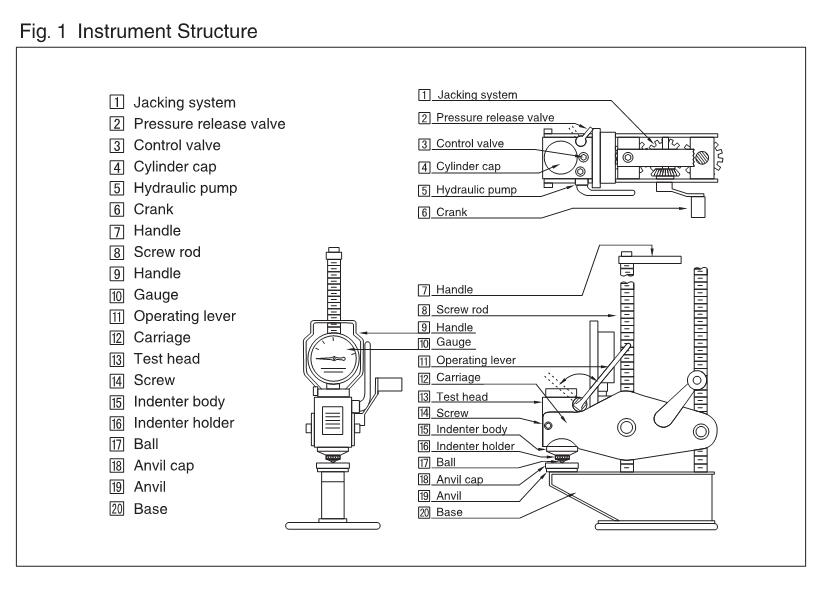 The instrument consists of carriage and test head.

The carriage is composed of base, anvil, anvil holder, throat, handle, jacking system and test head pallet. The base with anvil applies the extended structure in front , which is easy to clamp workpieces or to test tubes. The test head installed between the two pallets and the throat is responsible for holding the tester and keeping the 3000kg test force. The screw jacking system controlled bythe crank can be up and, down from the throat in order to make the test head move.